I’ve lived in New Orleans for 27 years and one of the things I’ve always loved about the city is its vibrant culture. From murals to street performers, New Orleans is brimming with art and creativity. Some of it may be provocative or even offensive, but all of it makes our city a great place to live and visit.
That’s why, as a property-owner, over the years I have been happy to give street artists a platform for their work.
Last fall, with my permission, the New Orleans street artist Cashy-D painted this mural at my warehouse.  It is a depiction of Donald Trump’s infamous Access Hollywood quote – except cartoon pictograms are substituted for the words Mr. Trump actually said.
The mural got some local media coverage, and a few days later I got a letter from the city accusing me of a zoning violation and demanding that I take the mural down or face possible jail time. That’s right, jail time, for a mural that depicts comments our now-President actually said – on tape.
Laissez les bons temps rouler indeed.
So what does it take to legally obtain a mural permit? Who knows. The process is so complex, so onerous, and so arbitrary as to be a violation of the First Amendment right to freedom of expression. A mural permit requires multiple pages of applications, a sketch of the proposed art, a minimum $500 fee, and a 3-6 month wait while EIGHT different agencies, staffs, and panels decide whether the art will be allowed.
At the end of the process you may or may not get your permit. There isn’t even agreement within City Hall over which law governs. I was told, “We need to figure it out and we will get back to you.” They didn’t. I’m not sure what led to this mess but I suspect it was honorable people with good intentions doing the best they can in an imperfect world. But they got it wrong.
The ACLU of Louisiana offered their help and it turns out the City of New Orleans selectively enforces the mural ordinance.
For example, suppose you are Yoko Ono. No permit required! 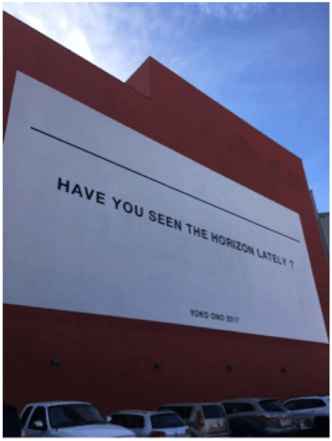 Yoko Ono Mural at the Ogden Museum of Southern Art
Or suppose you are a department within City Government.  No permit required! 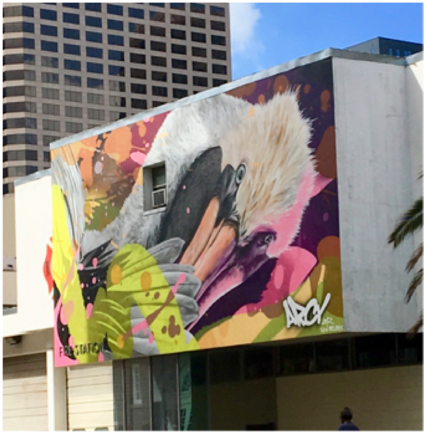 New Mural on a City-owned fire house at 801 Girod St.
As the ACLU of Louisiana points out in their lawsuit on my behalf, forcing people to ask permission from the government before expressing themselves violates the fundamental right to freedom of speech that the First Amendment was written to protect.
If an artist wants to create any small work of art on her own building she shouldn’t have to submit a sketch to the City and have a bunch of men on the Architectural Review Committee of the Historic District Landmarks Commission give her feedback on whether they think her art is aesthetically pleasing. Just let her create.
Yes, occasionally we will be confronted with art we find objectionable but that is preferable to living in a city where bureaucrats and busybodies decide what we see.
From what I understand, even within City Hall there is some acknowledgement that the existing process needs to be reformed.  I hope so.  I would love for this to be an opportunity for the administration to create an ordinance that is more than just barely Constitutional. Should that be our goal? Barely constitutional?  We can do better.
New Orleans is a city that celebrates difference and our mural ordinance should reflect this.  This is an opportunity for the City of New Orleans to be a progressive leader in how we treat artists.  Let our revised ordinance be a model for other cities.

New Orleans Agrees Not to Infringe on First Amendment Rights in ...

ACLU of Louisiana Statement on “Terrorizing” Charges Against...

ACLU of Louisiana Warns Anti-Protest Bill HB 197 Would Infringe on...