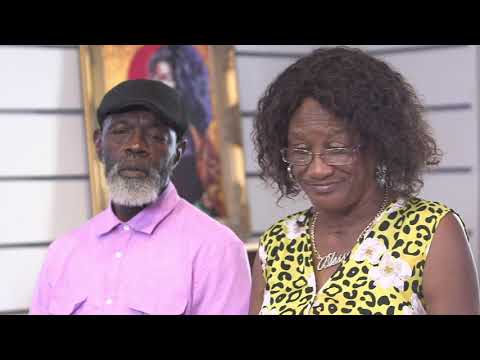 When people around the world rose and demanded racial justice in 2020, they stood on the shoulders of generations of activists and organizers who had marched, fought, and died for the cause of Black lives.

Many of these activists are celebrated and well-known: Martin Luther King Jr. and John Lewis. Ruby Bridges and Malcolm X. But others have been overlooked by history, or worse, their legacies have been tarnished and misconstrued.

For too long, the Black Panther Party has fallen into the latter category.

Ronald co-founded and was the first member of the New Orleans chapter of the Black Panther Party, first called the National Committee to Combat Facism. Betty was a member who was shot during a police raid of the chapter headquarters at the Desire public housing project in New Orleans in 1970. Both were incarcerated after the raid, Betty for nearly a year. Ronald and Betty are married now, and reconnected in 2019 after Ronald spent over 40 years in prison for his activism.

Ronald talked about being inspired by the writings of H. Rap Brown, chairman of the Student Nonviolent Coordinating Committee. As Ronald told WWLTV, “We didn't go around carrying big guns. No, we did party work, clinic work, sickle cell anemia. They don't highlight that. They highlight confrontation.”

At 20 years old, Betty became involved in the Black Panther Party after seeing police officers routinely brutalize and harass Black people in her community. For her, going to Panther party meetings helped develop her awareness of the injustice Black people in New Orleans were experiencing each and every day. “I’d see the harassment by the police officers in the community, but I didn’t have a name for it,” Betty said.

Betty worked with the Black Panther Party’s school breakfast program, which fed children before they went to school. She credits the party’s popularity at that time to its commitment to providing basic services that helped improve people’s daily lives – from school breakfasts and house cleaning, to providing bus services to allow people to visit incarcerated loved-ones.

“Once you start doing something for somebody, they’re interested in you. We did that from our hearts,” said Betty. “Because we poured out love, they gave love back to us.”

She also noted that the Panthers operated on the basis of gender equity: “In the party there was no difference, the men and women, we were equal,” said Betty. In fact, by the early 1970’s, most Panthers nationwide were women.

The Black Panther Party was relentlessly surveilled and targeted by J. Edgar Hoover’s FBI and labeled a terrorist organization, when in fact, as Betty explained: “It was never about hatred or violence” but rather, self-defense from the racial terror and dehumanization that had victimized Black communities for hundreds of years.

“When you stand up for yourself you always find somebody who’s going to knock you down,” said Betty, who was shot by police during the Desire Project raid.

The Black Panthers’ 10-point program affirms its identity as a movement committed to human dignity, human rights, and economic justice. The program outlines 10 demands, ranging from full employment and decent housing to an end to police brutality and mass incarceration.

More than a half-century after this document was created, Black people are still fighting for the basic human rights it demanded.

The Black Panther Party ultimately dissolved in 1982 after a relentless campaign of subversion and attacks by the FBI and law enforcement which resulted in the death of many Panthers including Chicago Chapter Chairman Fred Hampton, but its history holds lessons for the racial justice fights of today.

The party’s tireless work to provide basic services to its community speaks to our shared needs as human beings – for food, shelter, and safety – and to what Panther Jamal Joseph called the Black Panther Party’s “undying love for the people”

At bottom, the Black Panther Party was fueled by love – and that’s something every community could use more of.

ACLU Settles Lawsuit for Mr. Michael Celestine, a Black Man Who Was...

ACLU of Louisiana Calls for Termination and Decertification of...

ACLU of Louisiana Responds to Grand Jury’s Decision to Pursue...